The electric refrigerator has come a long way since being introduced in 1913. One of the newer trends in refrigerators is switching from a traditional incandescent light bulb to LED lights. These new LED modules offer the same or better brightness, are more energy efficient, and don't give off as much heat as their predecessors. However, depending on the type of LEDs used, replacing an LED light is not always as simple as swapping out the bulb.

Many people are reporting these lights going out, flickering, or strobing sometimes within months of purchasing their fridge. Where it can be confusing though, is when one of these lights go out, it affects the other lights in the circuit. So, now how do you know which LED, or how many LED lights need to be changed?

Below are the most common symptoms our customers have reported and how to determine which LED light or lights should be replaced.

Symptom 1: One LED light is out and others are dim / flickering / strobing.

Symptom 2: All lights are strobing / flickering / out. 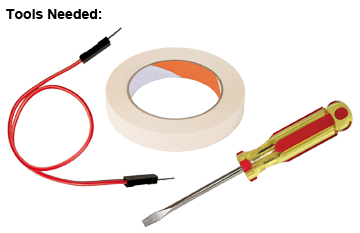 This diagnostic technique uses the process of elimination, testing the secondary lights one by one to determine which light or lights need replaced. To perform this diagnostic you will need a small jumper wire, tape and a flat head screwdriver or putty knife to help with removing the light modules.

We suggest starting with the lights in the freezer section since the freezer LEDs are commonly the first to fail.